FREE SHIPPING on all orders over $100 NOT INCLUDING ALASKA & HAWAII
You are here: Home › Blog › How to Know Whether You Have a Cold or the Flu 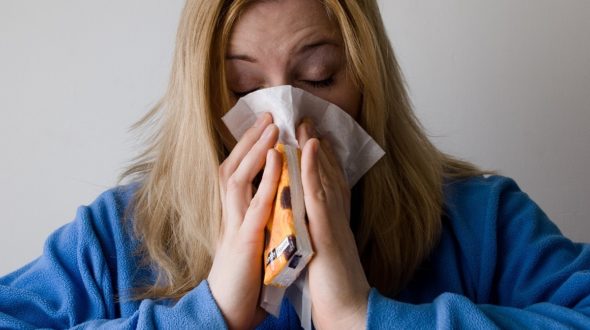 The vicious winter lion known as the 2017-18 cold and flu season is claiming victims by the day as Americans struggle to stay on their feet, at work and breathing easy.

What NBC News is calling “the worst flu season in a decade” has already resulted in thousands of hospitalizations, hundreds of deaths, and widespread influenza activity in 49 of 50 states (Hawaii is the only U.S. state to avoid the wrath) and caused $9 billion in lost work productivity.

The most troublesome news: we’ve just started the second half of the sickliest season of the year.

“Hopefully, (fly activity) peaks soon,” U.S. Centers for Disease Control and Prevention spokeswoman Kristen Nordlund said. “Regardless, there is a lot of flu activity happening across the country and likely many more weeks to come.”

The No. 1 question Americans who are weathering sick family members and flu outbreaks at work want to know: How do I know if I have the flu or just a cold?

Cold vs. The Flu-A Difference of Definitions and Health

Remember, the flu is a contagious respiratory illness caused by influenza viruses that infect the nose, throat, and sometimes the lungs. Flu can cause mild to severe illness, but also turn deadly.

Flu symptoms hit fast with the delicacy of a sledgehammer – within a matter of hours. Symptoms include fever, feverish chills, cough, sore throat, runny or stuffy nose, muscle or body aches, headaches and fatigue. Children could experience vomiting and diarrhea.

For people with pre-existing medical conditions, flu can cause complications that can turn fatal including pneumonia, inflammation of the heart, brain or muscle tissues, multiple organ failure, and worsening asthma and chronic heart disease conditions.

Rapidly progressing breathing trouble and decreased responsiveness are telling signs the flu may have hit you.

In contrast, cold is a slow-moving, slowly developing respiratory headache. Alas, colds, as the CDC notes, generally do not result in serious health problems like pneumonia, bacterial infections or hospitalizations.

Here’s the CDC’s Is “It A Cold Or The Flu” Test Chart:

The best way to be certain whether you’re battling a cold or a flu? Go see the experts. Sadly, CDC statistics show that one-third of children who die from the flu pass away before even going to a hospital.

Even with this year’s vaccine’s weakened ability to fight off H3N2 – this season’s strongest and sickliest influenza strain – doctors stress that a vaccine is our best defense against influenza, and it’s never too late in the season to get vaccinated.

Most importantly, health experts, stress, Americans need to be proactive and see a doctor quickly to know what they are battling. As Mike Medwin, who lost his 12-year-old stepson Dylan Winnick to the flu in January in Florida, parents can’t afford to wait, for this year’s influenza onslaught is particularly mericless and brutally quick.

“No indications. No warning. Just common cold,” Mike told CBS News of Dylan’s symptoms before his death. “That’s what’s so scary about it.”