FREE SHIPPING on all orders over $100 NOT INCLUDING ALASKA & HAWAII
You are here: Home › Blog › Automatic Hand Sanitizer Dispensers Are Making America’s Schools Healthier

Sneezes. Runny noses. Dirt on hands. Colds and infectious bacterias have no offseason in American schools, where they’re present from August through June.

These enemies of education cause the country’s school kids to miss millions of days of school annually, and make teachers’ jobs of enlightening America’s future even harder. The National Center for Health Statistics estimates U.S. Elementary and high school students miss 144 million school days of valuable learning time per year to illness.

According to an in-depth 2012 study by Kimberly-Clark on health issues in America’s colleges, high school and elementary schools, students lose 189 million school days to illness annually. The report found influenza leads to 38 million student absences per year. The average student misses 4.5 school days annually due to illness. Even worse, teachers miss on average of 5.3 school days per year.

The epidemic of absenteeism starts with presenteeism – kids coming to school sick. The Healthy Schools Project estimates 25% of America’s school kids come to school sick daily. When under-the-weather kids touch doorknobs, keyboards, desks, water fountains and more – instantly turning them into bacteria hot zones and leaving germs that can live up to 48 hours. Other students and teachers pick up those germs and the lousy game of school sickness continues. The fallout gets worse as student absences have been linked to lower achievement and higher school dropout rates. Meanwhile, the Healthy Schools Project reports parents are also knocked out by school sickness. American workers lose 126 million lost work days annually to care for sick children. 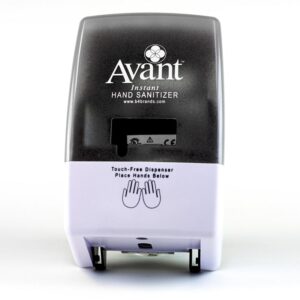 But many schools have turned to automatic hand sanitizer dispensers as a proven, reliable ally in the war against communicable illnesses, and are already realizing the positive results.

The CDC calls proper hand hygiene the best defense against the spread of infections in America’s schools. Hand washing has long been proven the best control measure against microbes, but kids’ active school schedules often prevent them from adhering to a regular washing routine. And, we know kids’ preference is also a speed washing technique that can leave some bacteria loose and free to harm them, and their classmates.

To get a full tissue on the immense problem of communicable diseases in schools, administrators are actively considering alternative, affordable hand hygiene techniques. Numerous studies, including research by the CDC, have found hand sanitizers to be a valuable asset in stemming the tide of the spread of bacteria and contagions in schools. And many schools are finding touch-free hand sanitizer dispensers to be a clean, efficient way of making their schools healthier.

Alcohol-based sanitizers have been found to quickly reduce the number of microbes on hands. Sanitizers do not eliminate all types of germs but – as the CDC reported in its a Show Me The Science feature – alcohol-based hand sanitizers can deactivate many types of microbes when used correctly.

Additionally, a 2007 study by Europe PubMed Central that tested the efficiency of alcohol-based sanitizers against standard hand washing in reducing illness and subsequent absenteeism in school-age children in 18 classrooms of 2nd and 3rd grade students, found hand sanitizers to be an appropriate alternative to hand washing for hand cleansing and may offer benefits in the school setting. The study’s focus group of teachers and school nurses also found school children to prefer hand sanitizers over soap and water.

Plus, the CDC recommends the use of hand sanitizers as a support component of hand hygiene in schools to slow the spread of seasonal illnesses and H1N1 influenza.

Automatic dispensers have a higher initial cost but can save immensely on product and maintenance costs by requiring less refills and creating less waste – up to 25 percent in some studies. Small squeeze bottles and pumps can get lost, misplaced and incorrectly disposed of.

Proper placement of the dispensers plays a huge role in their effectiveness. Hand hygiene products need to be placed where students need them the most: contagion hot zones.

Not only can hand sanitizer and automatic dispensers reduce absenteeism and help create a healthier classroom, but they enable school districts to save significant costs in their annual budgets – money that can be redirected to their No. 1 mission: Educating America’s future.

Clean Hands Saves Lives: A Must Read for the Healthcare Field
How to Survive Germs on Airplanes