FREE SHIPPING on all orders over $100 NOT INCLUDING ALASKA & HAWAII
You are here: Home › Blog › Clean Hands Saves Lives: A Must Read for the Healthcare Field
By B4 Brands on July 17, 2014 in Hand Hygiene, Healthcare, Schools – Education 0

As author and journalist Malcolm Gladwell detailed in his 2000 landmark book, “The Tipping Point,” It’s all the measles need to expand from a small outbreak of a few cases in a kindergarten class into an epidemic.

Now think of the damage the measles or another easily transferrable bacterial virus could do when left unchecked in a hospital?

Even with the world’s remarkable advancement in the understanding and containing of bacterial infections over the last century, millions of hospital patients die each year due to poor hygiene practices and awareness.

The simple washing of hands. The most basic of personal hygiene practices is all that is needed to save the lives of eight million patients per year. Swiss physician Didier Pittet, a pioneer in the development of hand sanitizer, has studied the subject for decades. French Author Thierry Crouzat details how Pittet has spent much of his professional life spreading the message of the importance of hand hygiene in his timely new book, whose title says it all. 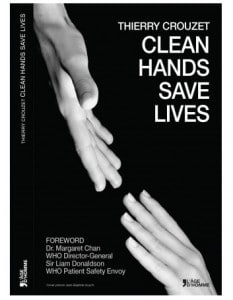 In Crouzat’s new passionate new work, he demonstrates with detailed, rigorous research – how disinfecting hands using alcohol-based handrubs saves lives worldwide daily. In conjunction with the World Health Organization, Pittet has launched a crusade to educate the world on the importance of proper hand hygiene. For his part, Crouzat has donated all of his book royalties to the Clean Hands Save Lives Fund.

Clean Hands Saves Live, which features a foreward by WHO Director-General Dr. Margaret Chand, recounts Pittet’s work over 20 years to lead a worldwide awakening in an ongoing worldwide struggle against in-grained habits, prejudices and ignorance about hand hygiene in and outside the healthcare industry.

In his book, a must read for anyone in the healthcare field, Crouzat takes readers along Pittet’s personal journey and humanitarian crusade to educate the world on the immense, often life-or-death importance of good hand hygiene.

Pittet long studied the work of the influential Ignaz Semmelweiss, considered by some as the most influential voice in the study of hand hygiene. Pittet’s first major breakthrough on the subject came in 1992, when he calculated that by using soap and water, a healthcare worker must spend 22-44 minutes per hour washing his or her hands to avoid contaminating patients. Pittet observed the rate of nosocomial infections –illnesses acquired during the healthcare process – depended directly on hand hygiene. The more he studied the attending practices of his doctors and nurses, Pittet came to a rational conclusion that would form the basis of his work on the subject going forward.

“Instead of striving to kill microbes in wounds, wouldn’t it be more reasonable not to put them there in the first place?”

Pittet then promptly changed the handwashing practices at his Geneva hospital with alcohol-based handrubs (ABHR). Nosocomial infections at the hospital dropped by 50 percent within three years.

In 1995, Pittet advised providing the disinfectant solution that is now used by almost all of the world’s hospitals. Pittet placed the formulas in the public domain – enabling all of Earth’s countries to produce it at a very low cost with local resources.

“Making a gesture as simple as cleansing one’s hands into a historic innovation certainly requires a special kind of personality,” Crouzat writes of Pittet, “a connection to people and to the most ordinary ideas, an open mind combined with an innate goodness.”

Dr. Pittet’s mission today, Crouzat writes, is unchanged: continue spreading the simple, but powerful, undeniable truth across the world, one mind and one heart at a time: